I got bogged down in my Man Booker reading thanks to a back-to-school season that included delivering our son to his first year of university. Still, I have now read 6 of the 13 longlisted books so can have some opinion of the shortlist announced on Tuesday. And I should have read more before the winner is announced.

My latest Booker book was Hystopia by David Means. I struggled to get in to this one, and I’m not entirely sure if it was the book or me–or perhaps a combination; it’s an alternate history, and it was hard to read in the short bursts I had available, because I never felt oriented in its world. But it is also kind of messy; this review pretty much reflects my assessment. It’s a book with a lot of interesting ideas and good qualities that never really drew me in.

It’s tempting to call Hystopia “experimental” but actually, it uses one of the oldest tricks in the novel’s book: the main story is a found manuscript, a novel by a Vietnam vet named Eugene Allen, and it’s framed by an apparatus of editor’s notes explaining how the novel differs from reality and interviews with the fictional author’s friends and family. What’s weird about this is that both the frame and the main story are alternate histories–Allen’s real world is not our world any more than the world of his novel is. (I use “weird” loosely. I was reading this while following US election news and listening to Jane Mayer’s Dark Money, and really, truth is almost as strange as Means’ or Allen’s fiction).The book is hard to summarize–so check the review above if you want details–but the central premise is that the “Psych Corps” established by JFK (who has survived multiple assassination attempts and is serving a third term as President) as learned to “enfold” the trauma of veterans using a drug called Tripizoid and the re-enactment of their trauma. Enfolding represses their trauma through selective amnesia, though they can still sense the “fuzzball” of memories in their brains, and can unfold with immersion in cold water or a really transcendent orgasm.

I couldn’t read this without thinking about Freud, for whom trauma could not be repressed without emerging as a behavioral or psychosomatic symptom and whose “talking cure” was meant to bring the repressed to light. In some ways, Means turns this idea on its head. But his novel also seems interested in whether, and how, trauma can be represented and recounted, whether its story can be told, and whether there is any value in doing so. Or, as one character puts it:

“Fuck plot and fuck story and fuck the way one thing fits to another and fuck cause and effect, because there wasn’t none and if there was we didn’t see much of it.”

I think this helps to explain the messiness of Means’ book, the half-heartedness with which he returns to the suspense plot that slowly moves it forward (more or less the attempt to track down Rake, a failed enfold on a killing spree, and the girl he has kidnapped. This book is quite violent, by the way). Trying to tell a sensible story is a dubious enterprise here: Singleton, one of the agents pursuing Rake, becomes increasingly obsessed with the need to write an operations report–and with conspiracy theories–as the pursuit goes on, and this happens after his own Vietnam trauma is partially unfolded. The need to tell a tidy story, in other words, seems to be an attempt to resolve trauma that’s doomed to fail. Allen’s novel-in-the-novel has a hopeful but unresolved ending, a slew of rumors about what might have happened to his characters. If that was an attempt to fix the traumas of his own life, well, we know from the start that he commits suicide after finishing his book.

I took breaks from Hystopia to read Maggie Nelson’s The Red Parts, an account of the trial of a man accused of murdering her aunt 36 years before, a murder her family had long assumed was the work of a convicted serial killer. The family learned a new suspect had been identified just as Nelson was about to publish Jane: A Murder, a book of poetry about her aunt’s life and death. Nelson’s book, which I really liked, has the narrative drive of true crime, but pauses to reflect on the ways this event, which happened before she was born, marked her family forever. Like Means, that is, she explores the ongoing effects of trauma. And in a strange way, Nelson’s two books “frame” each other, approaching the story of Jane and of the impact of her death in alternate ways.

I found Nelson’s book far more satisfying that Means’ and maybe that was because it had a tidier narrative structure. But Nelson, too, is suspicious of story-telling. She describes how her mother sent her a card when Jane was published with a quote from Joan Didion: “We tell ourselves stories in order to live.” Do we? Nelson asks:

the more I looked at the card, the more it troubled me. My poems didn’t tell stories. I became a poet in part because I didn’t want to tell stories. As far as I could tell, stories may enable us to live, but they also trap us, bring us spectacular pain. In their scramble to make sense of nonsensical things, they distort, codify, blame, aggrandize, restrict, omit, betray, mythologize, you name it. This has always struck me as cause for lament, not celebration.

I love stories, and I love them in part for the way they help make sense of the world. For years, on and off, I have kept a journal, telling myself my life story as a way of making order and sense of things. But I have known, too, that this is only one story, that in the comfort of making sense I am missing things, repressing things. These two books were valuable reminders of that.

The enterprise of writing about trauma is a fraught one. The story-telling impulse is, I think, a sense-making one, and so may always betray the truth of trauma in some way. We might do it anyway, but perhaps we will inevitably get it wrong. (These are all clichés, really, but sometimes clichés bear repeating. Maybe). 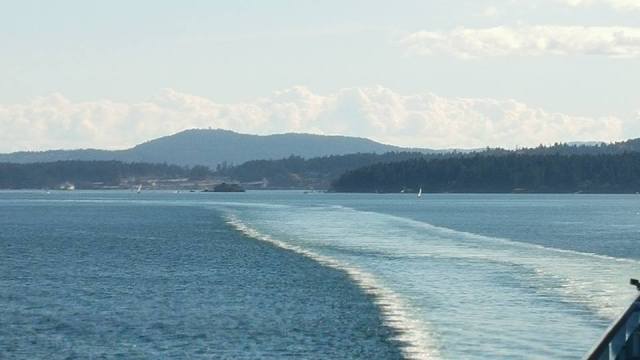 Headed home on the ferry, leaving our son behind. Here’s to new adventures!

5 Responses to Story-telling and Trauma