In the Middle: What I Read on Summer Vacation

I’m just back from 10 days in New England visiting my parents, slightly jetlagged, confused about what day/time it is, and doing mountains of laundry. Sometimes I find it hard to negotiate my position “in the middle” on these vacations–being both parent and child is awkward. But this year everyone seemed relaxed and easy-going and we had a great time.

It’s a vacation for familiar rituals, the kind that make up my own happiest childhood memories: daily trips to the lake down the road, going to get

A familiar scene at the end of the day. Everyone had swimsuits in shades of blue and green.

ice cream, epic games of Shanghai Rummy, feeding the fish in the rose garden. This year I got to meet an online friend IRL, and to see one of my cousins and meet his wife and young daughters for the first time. For those keeping score at home, I spotted only one copy of Fifty Shades at the beach, but it’s more a toddler-chasing beach than a sit and read beach.

I always imagine I’ll read a lot on vacation, but apparently I need to be sealed in a metal tube with nothing else to do; I read most on the plane. There 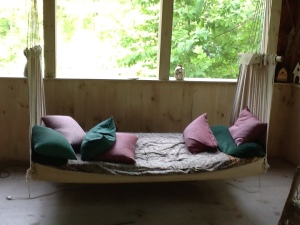 The Swing: favored reading spot on the porch, brought from the cabin in northern Wisconsin where I spent childhood summers.

were always people to talk to or the beach calling or woods to stare at. I admit, I spent some time rubbernecking at various Goodreads-related kerfuffles, but I didn’t comment and found that helped me not get all worked up about them. I’m trying to make “the only online behaviour I can control is my own” my motto for these moments, but righteous indignation feels soooo good.

I didn’t finish anything, but I am in the middle of a number of good books.

Wade Davis, Into the Silence I’m listening to this one, which means I’m missing some details (I could use maps, and I find it hard to keep track of the large cast of characters without seeing their names). But the big-picture connections Davis draws between British Imperialism, World War I, and the Everest expeditions of the 1920s are fascinating. At times there’s an overwhelming amount of detail, sometimes at the expense of a coherent narrative, but it’s worth persevering. Davis does a great job of painting vivid scenes. The climbing and exploring parts are my favorite, because I’m much more familiar with the Great War, but in both arenas, the men profiled in this books endured and accomplished amazing things. I’d say that people like this didn’t exist anymore if Davis himself weren’t one of them. It’s 29 hours of audio; I’ll be in the middle for a while.

Dorothy Dunnett, A Game of Kings (first of the Lymond Chronicles) I’m finally well stuck into this–almost exactly halfway–and really enjoying it. I jotted some notes trying to think about why Lymond is such an appealing character when he is, so far, at best amoral. Like a classical hero, he is larger than life; as his brother’s wife Mariotta says, “He seems able to do almost anything he wants.” Much of what the other characters do revolves around or is driven by him. He’s a mysterious and fascinating presence at the center of the novel, because we never see from his point of view (so far, at least). I love the way Dunnett makes all her characters seem fully rounded and human, how we see them from different angles, sometimes weak, sometimes admirable, sometimes both at once. This book is slow going because it’s so rich.

Ann Patchett, State of Wonder My mom gave me her copy of this and I stuck it in my carry-on to read on takeoff when I couldn’t have any electronic devices on. Then I read 160 pages on the way home. I’m really enjoying the way it plays off Heart of Darkness, particularly the focus on female characters. Marina is just heading into the jungle, so I think it’s going to get crazy. Patchett’s writing is lovely without calling attention to itself as “poetic.” I haven’t read her before, but now I think I’ll go back and try the very popular Bel Canto too.

Joan Smith, Aunt Sophie’s Diamonds I needed a “break” book for when I was too tired or distracted for more dense and difficult reading. I grabbed this because in a review of a different Smith title, Dear Author‘s Jayne and several others mentioned it as a favorite, and I liked Smith’s Imprudent Lady. It’s kind of a Regency It’s a Mad, Mad, Mad, Mad World, minus the roadtrip, with everyone going to crazy lengths to get their hands on the late Aunt Sophie’s diamond necklace. It’s pure farce, and a perfect vacation read, despite some anachronistic/American language.

I know a lot of people say traditional Regencies are more historically accurate than many of today’s romances, but I’m not sure I agree (this one made me google histories of welding, because a Regency welding torch seemed highly unlikely). The more ironic tone of the comedy and the lack of explicit sex may give that impression, but I’m not sure that taken in the mass they are really more accurate: they just “feel” more like Heyer, and to some extent Austen. It’s true that the anachronisms are almost always minor enough not to bother me, which is not always the case in more recent books. I might have to think more about this issue.

Up next? I want to keep up my momentum and actually finish all these books. Then I’ve got a pile of small-press Canadian books to choose from for the review I’m doing for my college’s literary magazine, and my mom gave me Hilary Mantel’s Bring Up the Bodies, too (it will make a good follow-up to Dunnett; I’ve been thinking about how they are similar and different). I’ll be busy for the rest of the summer!

5 Responses to In the Middle: What I Read on Summer Vacation